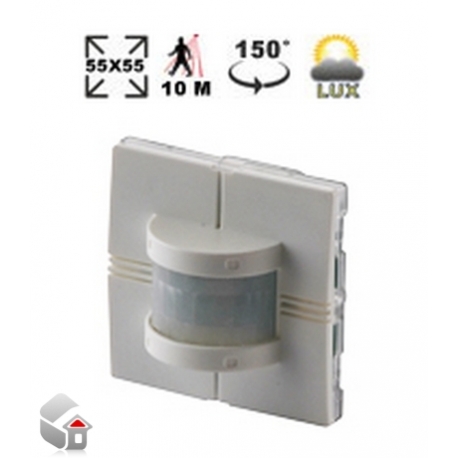 By buying this product you can collect up to 12 loyalty points. Your cart will total 12 points that can be converted into a voucher of 6,00 kr.

The SHE5XP150L is a 150° PIR sensor to detect presence and/or movement in indoor installations with built-in luxmeter, combining two products in one. It is part of the smart-house concept and can be used to control lights, rollerblinds, air-conditioning, intruder alarms and all the other functions supported by the smart-house system, in an automatic way depending on people-presence. This sensor is completely programmable via the SH tool.

The PIR detector is designed for mounting at a standard switch height (1,1m). As the SHE5XP150L is a passive device, several detectors can be placed in the same room without interfering with each other. The module should not be installed as follows: a) Outdoors. b) In places exposed either to sunlight or to motor vehicle headlights pointing directly at the sensor. c) In places exposed to direct air flow from a heater or air conditioner. d) In places where rapid temperature changes occur. e) In places exposed to severe vibration. f) Close to glass or other objects which might reflect the infrared radiation. Note: If the sensor is to detect presence, please be careful to mount it so that the area where presence has to be detected is completely covered by the sensitive area of the sensor. See figures “Horizontal and Vertical sensitive area”.